Skip to content
“One of the advantages of being disorderly is that one is constantly making exciting discoveries.” -A. A. Milne

Let’s talk about house and home stuff shall we? It’s Friday night. Derrick is back (yay!) but only in body (boo!) because he’s busy using his brain to study for a Professional Something test (I listen well don’t I?).

I had planned on sitting around watching a girly movie, but the tv appears to be broken. I usually don’t watch tv, and on the one night I try to…POOF! It was probably for the best because on the way to my chick flick I started watching a E True Hollywood story about Dog the Bounty Hunter. I haven’t seen an episode of “Dog the Bounty Hunter” but I was dazzled by his hair and couldn’t look away. I justified it by telling myself it was a Biography, and therefore educational…but now that I think about it, it was more of an autobiography since it was mostly interviews with Dog, who is not a dog, but a man with a golden mullet.
So, here I am sans TV, presenting a home decor post. The last one I did was on wooden fruit, and most commenter’s did not approve. Today we will look at another thing I got for free…a desk.
Here it is in all of it’s glory! 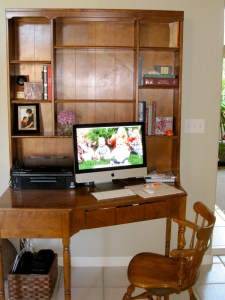 Honestly, I fell in love with the swivel chair.
See all those empty shelves? See the ones with stuff in them? The ones with stuff in them are actually “groupings” (I think). Once, long ago, I stumbled on this post about groupings by Flower Patch Farm Girl, and I’ve been reading her blog ever since. I went back to her post to get some helpful hints, because really I didn’t know what I was doing.
After re-reading her post on grouping, I still didn’t know what I was doing, but I did know that if she could use an old doorknob as a decorative piece, I could use wooden fruit.
Here’s my favorite grouping. The painting is by my buddy Jess. Isn’t it awesome? For my birthday one year she gave me a set of three. She’s very talented but we have a hard time finding paintings of hers that I like, because she has a lot of “scary” and “disturbing” elements in her work, and I like flowers and hearts…and puppies. You should have seen us in art class together; we would color and listen to Bert Bacharach records. 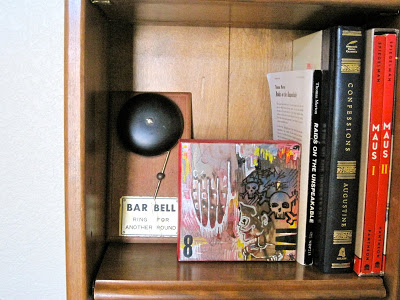 The skull theme of the painting is great for a shelf that holds Maus 1 and 2. Great graphic novels. Haunting. If I ever had a book club, they would be the first books on the reading list. I also put that “bar bell” behind for depth and hilarity. It says “ring for another round”…get it? HA!
This is the other group I did. These groups took me an entire evening and now I’m stumped as to what to do with the other shelves because I’ve pretty much run out of cool stuff. 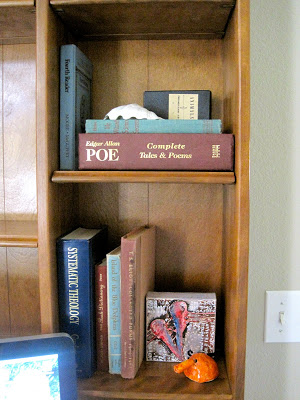 Favorite books of mine with another painting by Jessica. Okay when I say “favorite” I mean “books that aren’t paperback, because I’m usually cheap like that”. I honestly haven’t cracked that Fourth Reader for a long time.
See that orange whistle? I made it. In pottery class. In college. It took me about fifteen prototypes to make a whistle that actually whistles, and now it’s adding depth to my grouping, like Flower Patch’s doorknob. When you get a degree in Fine Art, you can depend on it to pull you through the tough times in life, the times when you don’t have a doorknob to use in your “grouping”.
So there you have it. Please send suggestions for the remaining shelves!
In other news, my two year old has been acting out today. Like, really, really, really, really, acting out. Right now he’s in bed, throwing his fifth temper tantrum. Where’s a cone of silence when you need one? Send help.