“TMI? Too Much Information. It’s just easier to say ‘TMI’. I used to say “don’t go there”, but that’s lame.” -Michael, The Office
I wasn’t sure if I should “go there” with this post. But I can’t think about anything else so I thought maybe, just maybe, if I tell everyone I know about it my brain will shut up and stop saying, “RED ALERT! RED ALERT!” all day long.
On Friday, on the long drive home, I thought I was in labor.
I have had two children but I have never been in labor, so I wasn’t sure.

Don’t be jealous.
Having never gone through any sort of contraction, I had to call my friend to ask her if she thought I having contractions.
She was not impressed with my symptoms. She laughed at me and told me that I probably needed to get out of my car for a little bit.
The horrible, make you want to cry, feeling continued all this weekend. I Googled my symptoms and decided that I had a UTI Infection OR a Kidney Infection.
I called my friend again, because she has had a Kidney Infection AND she has been in labor. Her life has been a “graveyard of buried hopes”…or something.
She laughed at me again. I could practically SEE her rolling her eyes at me through the phone. She told me that Kidney Infections involve SHOOTING pain down your back and legs. I tried to say that sometimes I felt shooting pain, but she cut me off and said something about her high pain tolerance and my big baby ways.
My doctor called in a prescription to kill the UTI monster…

(disclaimer: this is not an actual picture of a UTI monster. This is a photograph of my friend’s child at Halloween. He is a Wild Thing. She made his costume because somewhere in the midst of being in labor and having kidney infections, she has found time to become Way Too Good At Making Halloween Costumes)
Last night I had nightmares about my baby, and realizing I have entered the phase of pregnancy where one worries about everything, I decided to go to the Doctor’s anyway, just in case I was dying or something. 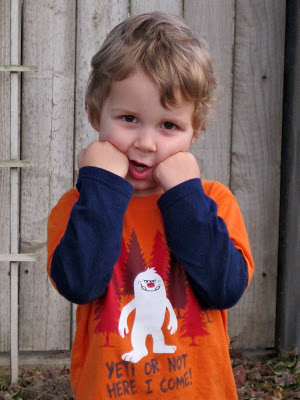 And? Nothing is wrong with me.
I do not have a Kidney infection.
I don’t even have a UTI monster.
What I do have is a giant baby who has crash landed on my bladder and found it to be comfortable.
He is eating chips and watching college basketball. I can tell. He has no intention of moving.
So, that’s my sad story. I promise not to talk about my bladder anymore, no matter HOW much I am thinking about it.
The End.