Sometimes I just feel like talking, and guess what? I have a blog! So I can talk with my fingers! You can read my thoughts! Lucky YOU!

Tonight I’m taking an inventory of my life:
I have a lot of mismatched socks, and A LOT of yard work, and there’s never enough coffee but I also have a steady stream of superhero sightings and I might have just purchased a pair of glamorous silver flip flops for $2.50.
I’m realizing my life has a giant smattering of random. This makes me happy. I love random. I love surprises. I love making the bed with the kids toys still on Derrick’s side. He tries to tumble into bed, but he is ruthlessly stabbed by four matchbox cars and a slinky. HA! I laugh every time.
I love the wacky songs that Q sings to me (“This one’s a long one mom. YOoooouuUUU don’t have flowers on your SHIRT!!! ANnnnnnnddd….I whack you on the FAAAACE!”)
I don’t love the face-whacks.

In my life there’s Disney, because Disney owns pretty much everything on the planet and I cannot escape.

I’m always being pointed at by someone, in this moment it’s Shel, who is riding a toy car, holding his MeMe, and chewing, all at the same time. He’s actually chewing and yelling, because he wants to take a picture with my camera.

Batman would want to take a picture with my camera too, but he’s busy solving the world’s mysteries with a Mouse-ka-tool. If you don’t know what that is, I can’t help you. It defies explanation. 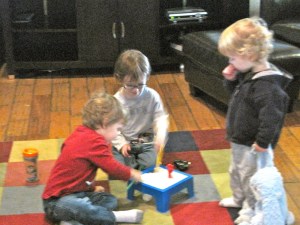 I wish I took better photos, but I also wish I could Bowl better than Derrick. Neither of those things are ever going to happen, so let’s get past the blurriness and analyze what’s really happening.
There’s an intense “Don’t Break the Ice” Tournament going on here, and OF COURSE I gave three year old boys small plastic hammers. OF COURSE!
You can tell it’s an intense game by the posture of Sheldon, who is sucking his thumb and concentrating very hard. He has his money on Q. By “money” I mean “goldfish crackers”.
Side note: The colorful rug in the “Don’t Break the Ice” pic is not included in the Batman and Mickey Mouse picture. I need to borrow your steam vac Kayla.
I don’t think Kayla reads my blog. Rats.
While we’re taking a close look at photos which define my life, let’s talk pine cones.
I have a lot of pine cones. 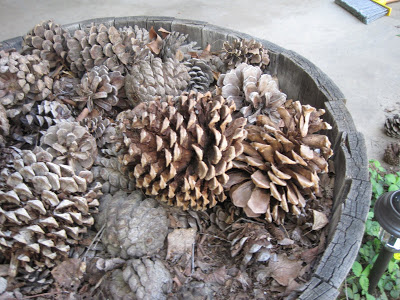 This is one barrel full, and I have three more just like it, not including the one I cleaned out and planted flowers in. When we first looked at this house, I saw the barrels full of pine cones and I ALMOST said, “Oh, just what I always wanted! A barrel of pine cones!”, but I didn’t.
It turned out that the current owner of the house was standing right next to me. I’m glad I didn’t say anything, what if these are the product of months and years of serious pine cone collecting on his part?
Our new house has a lot of trees. There are trees that drop pokey balls, trees that drop fluffy globs of pollen, trees that drop teeny tiny seeds and birch tree caterpillar seed things, and there are trees that drop pine needles and pine cones, and almost all of them drop leaves.
I have to sweep the path every single dingle day, but I put up with it because
a) I don’t really sweep it every day I just feel like I should be sweeping the path every day. It’s yard work guilt.
b) I like trees.
This reminds me: Kayla, Derrick cannot figure out how to start the leaf blower you guys gave us. Although it’s hilarious to watch him try…
This is probably the weirdest post I’ve written, but to make up for it I’ll leave you with a picture of an adorable cowboy.

Is all forgiven? What’s your favorite random thing? Do you buy hand soap solely because you think the label looks pretty? (Me too!)