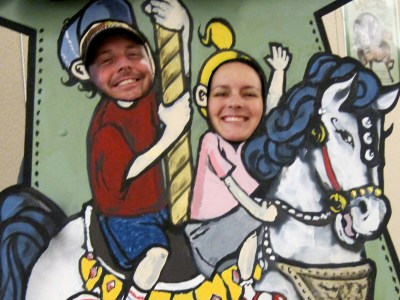 I have laryngitis.
In the time it’s taken me to type the last two sentences Derrick has asked for chocolate cake…twice. The first time I resisted getting myself a piece, but when I got him cake and a glass of milk a SECOND time I couldn’t hold back. So, I cut myself a slice and sang the original hit song, “Tempted by the cake of another…”
That’s the end of it. It sounded really sexy though (because I have laryngitis). Derrick said I sounded like a chain smoker, but what does he know.
He sure doesn’t know a good thing when it shows up in his local paper. There was an article about a carousel exhibit in town. Children under six would be given a ticket to ride the town carousel, which is housed in the oh-so-appropriately named “PLAYLAND”.
I decided we were going. I forgot I was the only girl in the family. I was met with resistance.

We went. Quinten told Derrick, “I didn’t know it was going to be so much fun!” and I gloated. I’m still gloating. I love it when my schemes succeed.
The exhibit was stupendous. The carousel animals on display were old and amazing, and many of the horses had tails of actual HAIR.
I was unable to read anything educational. The only thing I read was, “PLEASE DO NOT TOUCH” and after that I was busy saying, “NO TOUCHING! NO TOUCHING” as my boys ran around screaming, “ANOTHER HORSEY! ANOTHER ONE! AHHHHH! CAN I GET ON IT!? WHAT ABOUT THIS ONE?”
Now is probably the time to tell you that I took horrible pictures. These animals were beautiful, realistic and frankly, I got a little wrapped up in the fabulousness of it all. 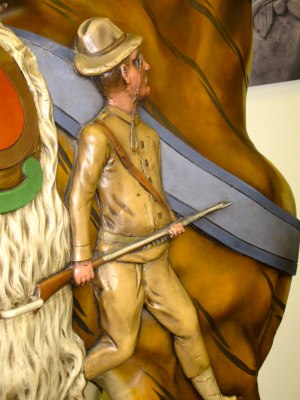 Imagine my excitement! Theodore Roosevelt on a tiger! With a gun! Fun fact: he is my favorite president.

The docent for the exhibit was a very nice lady. She told us she was going to show us something that many people don’t see. She walked over to another tiger and whispered conspiratorially, “Look! Here! A bird!”

I went to look and I seriously thought there was a secret compartment in the tiger’s saddle that held a bird, you know, music box like. Now seems like a good time to tell you that I’ve read almost all of the original Nancy Drew books…twice. There’s always a secret compartment.

As an adult, I’ve given up hope for secret compartments. However, these carousel animals were OLD, like 100 years old. Surely the possibility existed.

I was rather disappointed to discover a parrot carved under the saddle. But really? What an amazing parrot. The colors are perfect. I wish all saddles were this beautiful. 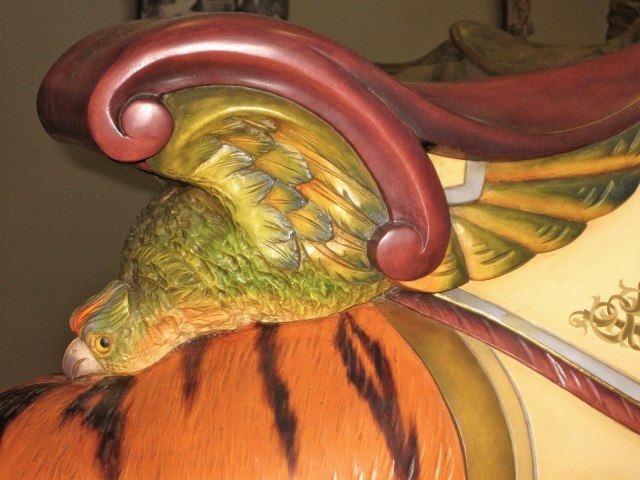 The animals were breathtaking. I almost walked past this little lady, who was sandwiched between two glamorous giraffes: 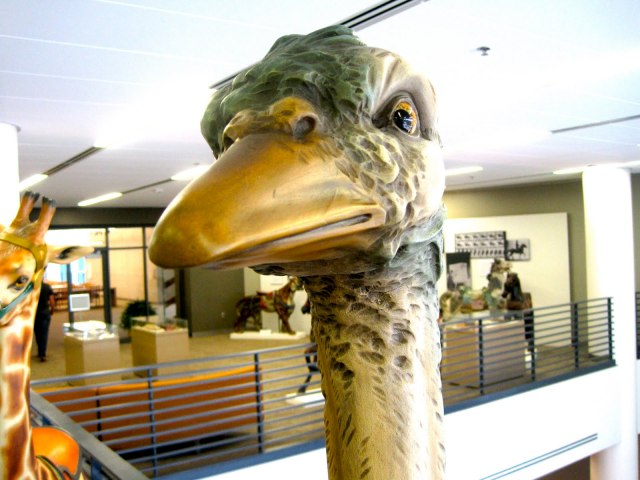 People ask me why my blog is named “Ostriches Look Funny”.  Now seems like a good time to tell you that I don’t know why. If I had any foresight, I should have named my blog something relevant to the topics I write about: parenting, faith, coffee, farm adventures…

Today marks a momentous occasion: it is the first time in the history of Ostriches Look Funny that I have actually blogged about Ostriches.

Note: All of the carousel creatures are owned by a local man, who apparently (and I believe it!) has one of the best collections in the country. His name? TOBIN! If my Tobin decides he wants to collect something, I hope it’s something beautiful…