Skip to content
I sleep with my window open so I can smell the jasmine and the roses that live outside my bedroom window. Sometimes I hear a dog howl. Sometimes I wake to the sound of ducks, quacking their brains out and splashing in our pool.
It’s not a bad way to start the morning, but seriously, keep it down ducks. It wasn’t even 7 a.m. and you’re not roosters, you are DUCKS.
I’m feeling better. After 5 plus weeks of sickness, just saying, “I feel better” makes me think I’m going to catch another virus. It’s part of my “Try Every Communicable Disease” springtime extravaganza
On Sunday I woke to the sound of QUACKING and SPLASHING from the DUCKS who think they are ROOSTERS. It was the first day in a few days that I crawled out of my bed and left my crackers and 7 up behind. My mom had the toddler so I suggested a trip to the park with the big boys. I would sit on my bench and watch the children frolic. I would talk to my husband about life instead of barf. It would be glorious.

We live next to one of the biggest parks in the city but I don’t go there often because Tobin the Toddler would dive into the duck pond and everything would be gross and GOOSE POOP we’d have to go home.

We parked ourselves next to a cute little creek and enjoyed the cool and quiet of 8 a.m on a Sunday. The boys wanted to walk in the creek. I said no because, ew.

I forgot that I had brought their daddy along for a nice chat. He felt they neeeeeded to get in the water and “be boys” and whatever. I felt exhausted again, so I just sat on the park bench and decided not to argue. As the boys explored the murky depths of the creek, I found it impossible to talk or think about anything else except for swamp germs. 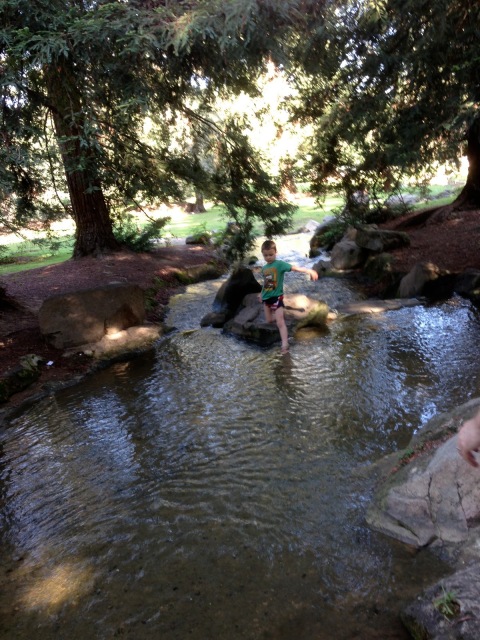 At one point I tried to cry “Mosquito” but everyone said they were gnats. Then, finally I realized why I was so stressed out about the fact my kids were tromping around in a “NO SWIMMING” zone.

A) I like to follow the rules. I mean, not really, but I do respect signs. I don’t smoke in restaurants, I wear shoes in the mini mart, and I don’t swim in gross pond water. Call me crazy.

B) I had JUST finished being sick from an illness that I had contracted from the kids. Now they were splashing around in GOOSE POOP.

I pointed out reason B to Derrick, who up to that point thought every thing was bucolic and manly. As much as he loves rugged adventure through GOOSE POOP water in a city park (or whatever), he wasn’t too keen on getting sick again. Everyone had to get out of the water.

By now I was exhausted. I was ready to go back to bed, curl up with Curb Appeal, and nap. So I did. This post is just to tell you that if I’m sick for another 5 weeks, we can all blame Derrick or GOOSE POOP or just rugged adventuring with no regard for signs. Pick one. I know I will. 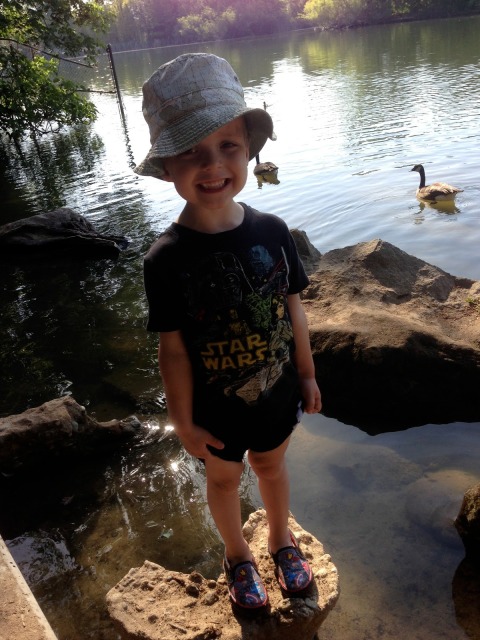 Happy Monday. May the GOOSE POOP of life be in the pond and your feet be on the ground this week.